Home » Estoy con la banda, or Holy crap, how did I get here?

Estoy con la banda, or Holy crap, how did I get here? 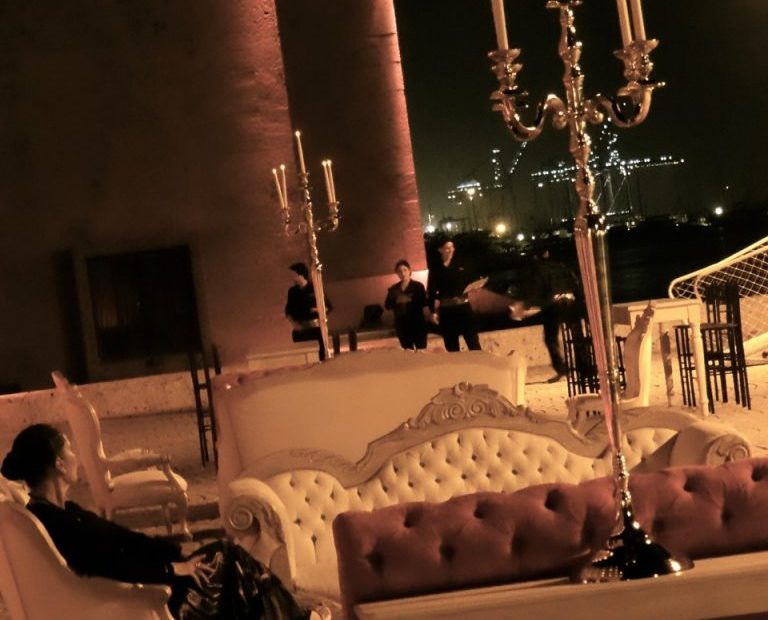 Tonight, Helen’s band played at a wedding at the convention center, and I got to go along as the band’s photographer. A real Colombian wedding!

As we walked through the service doors to the Convention Center, I was nervous. What would I say if someone asks me who I am? “Helen… how do I say ‘I’m with the band?'”

“Oh, of course. Estoy con la banda.” I practiced it a few times. Those words were my magic key to enter a world where I didn’t belong.

We walked out of the service area and through the most opulent room I’ve ever seen, filled with glowing candles, sparkling crystal, richly draped fabric, and  tiny petit fours on individual Swarovsky pedestals. I wished I had worn my little black dress instead of pants. (Note to self: little black dress is never wrong.)

The stage was on a corner of the outdoor patio, over the water. The two wooden pirate ships I had seen on my earlier Cartagena wanderings were on the other shore, creating a dream landscape. While the band set up, I tested my camera settings, shooting LIberace candelabras and velvet couches on the patio.

Yachts passed behind the stage. Sometimes loud music would be pouring out of the yacht and people dancing on the deck. I snapped a few shots of them and thought — I’m at a wedding in Cartagena and there are yachts going by. My life is a crazy dream. How did I get here? Estoy con la banda.

The guests weren’t there yet, and wouldn’t they want to eat before they danced? It could be hours. I asked Adrian, the keyboardist and band’s leader “Quánto tiempo hasta la música?” which might mean “How long until the band plays?” if you are a Spanish-speaking toddler. “Una hora. Máximo.” I didn’t believe him, since I thought the guests still need to arrive and eat dinner. I wished I’d brought my Kindle.

Then about 200 guests arrived, all at once. By yacht! Seriously, not one but two yachts filled with wedding guests pulled up to the patio and the Glitterati emerged. The women were in spectacular evening gowns, one more daring and sparkling than the next. The men were much more casual,  in white linen shirts, pants, and deck shoes.

(luckily my job was to photograh the band, not the wedding. It was very hard to get good shots in the dark!)

The band started playing reggae music. Waiters appeared and handed out champagne with strawberries and ridiculous hors d’ouvres, like one olive on a bed of salt in a teensy glass dish. All the guests were given white balloons to carry around… it was totally surrealistic. I was so engrossed in the splendor of it all that I forgot the bride and groom hadn’t even arrived yet.

Here’s a very brief video of the band, so you can see one of the yachts & hear Helen sing just a little.

Then a man took the mic and made an announcement. I made out the words ‘esposos nuevos,’ or newlyweds. Then the bridal couple arrived —  in their own yacht.

As the bridal yacht pulled up alongside the stage, fireworks went off in the sky over the water. A full-on, 4th of July display. A spotlight — I am not making this up — was trained on the bridal couple as they emerged from their craft. Here’s a very brief video clip:

Toasts were made by, I assume, the best man and maid of honor, everyone released their white balloons into the sky, and then the band played some more until everyone had disappeared into the building for dinner. I can’t even imagine what they feasted on in that luxurious dining room.

The working class Cartagenians in my neighborhood are generally short and come in a sepia pallette of brown and black shades, but the guests at this wedding were all tall and light-complected. Family resemblance can account for a lot, but there must be school chums, neighbors, coworkers in the mix. I couldn’t help thinking about Helen’s discomfort at the hotel lounge at last week’s gig, her feeling that she didn’t ‘belong’ there because her skin is so dark. I noticed that the band and the staff all looked like the Cartagenians from my neighborhood, darker and shorter than these party guests.

Helen has told me more than once that she intends to make a lot of money someday. I believe she has the talent, determination and willpower to make that happen. But she’s aware she’ll have to overcome the double barrier of skin color and Creole accent to make that happen.

On the way home in the cab, I gazed at the beautiful medieval walls that surround the upscale Old Town area (Da Toown, Helen calls it). The castle walls are said to be mortared with slave blood, and the city walls probably are as well. I can’t help thinking that these walls must look very different to Helen than they do to me.

And yet, she just performed for a wedding with yachts and fireworks, and tomorrow she will sing again at the top hotel in all of Colombia. I hope she is on her way to owning her own yacht someday. I have other dreams for myself.